Home » Our Projects » The Tempest: A Storm of Sound

“…we feel so enriched, staff and children by the whole experience …The impact on our learning across the curriculum is enormous!” (Teacher)

This was a new project devised by Mid Wales Music Trust and inspired by the 400th anniversary of Shakespeare’s death. The project was delivered in partnership with Sinfonia Cymru, and was a co-production with The Hafren, Theatr Brycheiniog and Wyeside Arts Centre.

We commissioned a new, abridged version of the story from writer/director Hazel Gould who together with musician Sam Glazer created an interactive one-hour show for younger audiences.

“When you first came in I said to myself how are we going to make a song in a day and when we made the music it was amazing.” (pupil)

In the song-writing workshops the children used Caliban’s speech “Be not afear’d, the isle is full of noises…” (Act 3, scene 2) as a starting point for their own creative work, devising new songs by writing additional verses and setting the lyrics to music.

Here are Year 6 from Priory Church in Wales Primary School performing their song on stage at Theatr Brycheiniog, Brecon:

Here's a whistlestop glimpse of our Tempest show, filmed live by Daniel Harris of AOTV at Theatr Brycheiniog on Monday 14 March 2016:

“When I came off stage I was very pleased with myself because I did not think I could do it but I did.” (pupil)

Stage-design workshops were led by Hilary and Graham Roberts, and Year 5 & 6 classes created the sets for the final performances, including Prospero’s grotto, spell books, and tempestuous clouds.

The Tempest is the most musical of all Shakespeare’s plays and the show included settings of songs from the Tempest by Jonathan Dove and Thomas Arne, as well as live music for string quartet played by the Sinfonia Cymru musicians, including music by Ravel, Shostakovich, Schubert and Bartok.

What the children said

“As we were on the bus we were all singing our song and all the other songs. When we got to Theatr Hafren and walked in the excitement was jumping around inside our bodies because we will be on stage singing our song with some of my words.”

“I had so much fun watching the play.” (pupil)

Thanks to all the generous funders who made this project possible: 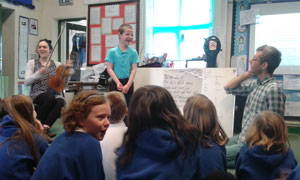 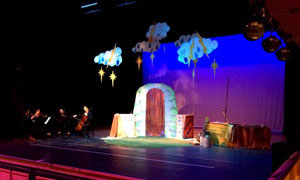 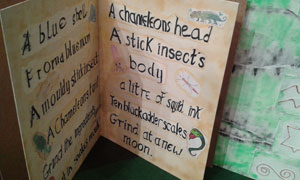 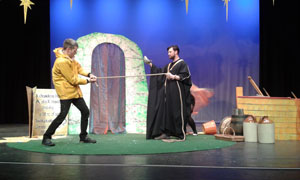 What the teachers said

“We had an amazing workshop day on Friday, lots of parents said today the children were singing all weekend. It was brilliant, and Simmy, Sam and Adam were fantastic with the children.” (Teacher)